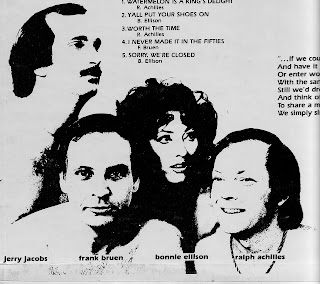 Now you too can hear the wonderful songs from the F.A.B. Company!! The author of MS ENTERTAINER, Bonnie Lynne Ellison, is a member of this amazing show group, along with Ralph Achilles, Frank Bruen, and Jerry Jacobs. The lyrics of the songs preceed each chapter in MS ENTERTAINER.

Order their music by sending your request to msentertainer.bonnie@gmail.com.  Include the number of CD's you would like to purchase for $15.95 each, your shipping information and phone number.  You may use a debit or credit card through PayPal or you may send a check or money order to: Global MS,  LLC, P.O. Box 91, Littleton, Colorado 80160.

To order visit: http://www.iuniverse.com/Bookstore/BookDetail.aspx?BookId=SKU-000183999
Share a personal experience with a 25 year old singer/entertainer documenting her first twelve months with Multiple Sclerosis, the confusion, the disappointments, the failures, the accomplishments, her hope and recovery.

•• If accidents cause MS?

• “Bonnie Ellison is a patient of mine with Multiple Sclerosis. She has a good knowledge of the disease and an understanding of how it can affect your life. She is a positive person.”
Mindy Wiener, M.D.

BONNIE LYNNE ELLISON is the author of the series “MS ENTERTAINER”, published in the National Multiple Sclerosis Society’s Northern Chapter in Fort Collins, Colorado. She is a published writer, songwriter, a musician, a vocalist, a teacher, and a Multiple Sclerosis patient. Bonnie and her National entertainment group, the F.A.B. Company, held the first MS Radio-thon on KHOW to raise money for Colorado MS patient services. After 40 years of personal experience with Multiple Sclerosis, Bonnie is a first-hand authority on this changeable disease.